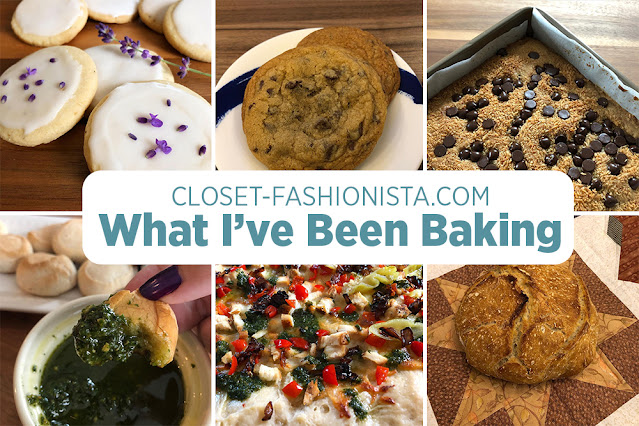 Time for part 4 of my baking escapades! This only covers through Thanksgiving so I'll share my "holiday" bakes later. Sadly I didn't make much over the holidays, must have been burnout. Have you been trying any new recipes (baked or non) lately? Or maybe you've tried takeout at some local restaurants you hadn't tried before to help the local economy?

This might be the favorite recipe discovered during quarantine. I tried it to make use of some coconut I wanted to finish up and after I made it I bought 2 more bags so I could make them again and again! Christian is obsessed as well. I'm not usually a blondie fan but I think the fact that it's chocolate, coconut and a perfect mix of crispy and gooey converted me. We use all different sized chocolate chips so it adds even more texture. Make these, you won't regret it.

This is becoming a weekly staple in the house. Christian is working from home for a few months (hopefully longer) he doesn't need regular sandwich bread so I switched over to this crusty no-knead bread to have with fried eggs. It's super simple and easy! You'll need a dutch oven to cook it but it's very simple.

I had never made cookies with browned butter before. I didn't know what I was missing! These are SO GOOD. I only made half the recipe when I made them because it used a lot of butter and I didn't want to waste it if I didn't like them. Next time I'll be baking a full batch - and buying some chocolate wafers to get even more melty chocolate (we used chocolate chips and chunks since we had them on hand.)

I was always afraid of making donuts. Just like with bagels they seemed too hard. I started my donut journey by trying out a simple baked chocolate donut. They came out really good except for our icing job, we need to figure out the right consistency. Maybe next time I'll be brave and try FRIED donuts. I'm also going to try these Cinnamon Braided Donuts very soon (maybe even before this post goes live.)

Christian grew lavender in our garden this year and I decided I should try cooking and/or baking with it. I searched for an easy recipe to do and came upon these shortbread cookies. The texture is amazing! Some bites were a little too perfumey for me but overall these were a nice change from my usual chocolate desserts! And they're pretty.

Pretty basic oatmeal, chocolate chip cookies. I didn't have the right size mini cast iron skillet for these and they were annoying to clean so I probably won't remake these as the baker says they won't cook the same if they aren't in a skillet. But they were tasty!

And of course we have remade some of our favorite recipes as well.

Two easy things we've remade a bunch of times. The dough balls are super easy (I just need to get better at cutting them) and I'm getting better at the pizza crust recipe. Sometimes I stretch it too much and it gets too thin, whoops!

We pair the dough balls with garlic butter or - even better - with our favorite pesto from the local farmer's market! If you're in Connecticut see if they sell near you! It's $8 but well worth it!